As of the date of this post, we have about 5 months remaining until the 2014 CrossFit Games Open begins, give or take a week or two. Planning to compete this time around? If so, you'll probably be well-served to have some idea of what to expect when March rolls around.

While we can't know for certain what Dave Castro and HQ have in store this year, we have plenty of data from the past three years that can inform us about what the Open is likely to look like. How you go about training for those events is another topic altogether (one I touched on briefly last year in my post "Does Our Training Look Like What We're Training For? Should It?"), but in any event, it's better off not to go in blind. We know CrossFit is all about preparing for the unknown, but here's a hint: if you actually want to do well in the Open, I'd worry more about getting your burpees and snatches in order  and less about those pesky ring handstand push-ups.

In many ways, today's post will be an update to last year's post "What to Expect from the 2013 Open and Beyond." However, I plan to expand on certain topics a bit more and really focus the discussion on the Open. We'll cover the Regionals and Games another day (you can read my most recent post for plenty of discussion of the Games programming). For those just getting into CrossFit after seeing the Games on TV, here's a quick and VERY important note: the Open workouts will not look much like what you saw on TV. But even the athletes who made it that far had to master this stuff first.

OK, with that out of the way, let's get started. The easiest way I see to do this is to answer the questions that any athlete should have as he or she prepares for the Open.


What movements will I need to do?

Good question. While the Games have used a total of 51 different movements in the past, the Open is testing a much smaller skill set. There have only been a total of 14 movements used in the Open in the past three years, and 10 of those have been used every year since the Open started in 2011. Below is a breakdown of the movements that have been used in the Open in the past, and thus the movements you can expect this year. The table shows the percentage of the total point value that each movement was worth each year, along with an estimate of how much they'll be worth this year. The projection for this year takes all three years into account but gives more weight to the more recent years.

Right there at the top, the top five lifts (snatch, burpee, thruster, pull-up and jerk) account for over 50% of the points. Get really good at those movements, make sure you don't suck at toes-to-bar, box jumps, double-unders, wall balls or muscle-ups, and you should do well in the Open.

Now, you'll notice I have a "Subcategory" listed for each lift (I know a wall ball isn't actually KB or DB, but I put it in there because it's a lift that doesn't use a barbell). I find that looking at things based on the subcategory can be useful, because it gives us an idea of the type of movements that will be used. For instance, cleans haven't actually been used that much in the Open the past two years, but I wouldn't recommend skipping them in training - the movement pattern is similar to that of a snatch, which is highly valued. Below is a table similar to the one above, but looking at subcategories instead of specific movements.

Clearly, the focus is on two things: Olympic-style lifts and basic bodyweight gymnastics. This is partly due to equipment restrictions in the Open, but partly due to the fact that HQ seems to really value those two types of movements when making the first cut of athletes. This distribution changes quite a bit when we move into the Regionals and Games, but for now, we're focused on the Open.


How heavy will the lifts be?

I came up with the concept of average relative weights last year as a way to understand this topic a bit better. You can read the full write-up on how I've done this in last year's post "What to Expect from the 2013 Open and Beyond," but here's the concept: depending on the movement, a certain weight may be heavy, medium or light, so I have normalized the weights prescribed on each workout so that we can get a fairer indication of how "heavy" the lift was. After looking at the normalized loads that were prescribed in the past three years, I applied the average relative weight we've seen to the various lifts to show the average expected weights in this year's Open.

Now, while the above graph is useful, there are a couple other factors to consider:


The chart below illustrates the distribution of weights that have been required in the past (so, ignoring the 135-, 165- and 210-lb. snatches that could be performed in 12.2 and 13.1). Above each bar on the chart, I've given some examples of the type of movement/loading combinations that would fall into that range (sorry for the crappy resolution on this one, Excel for Mac is pretty awful about text boxes on charts).

What types of WODs will be programmed? Will there be any fun chippers like "Filthy Fifty?"

To answer the second question first, no, there probably will not be any fun chippers. HQ has made it clear that they believe couplets and triplets are the bread-and-butter, so get any thoughts of a "Filthy Fifty" out of your head now. Also, they probably won't program "Murph" (at least, I certainly hope not).

In the past three years, we've seen 16 workouts:
The chart below shows the duration, number of movements and load-based emphasis on lifting (LBEL) for each workout in the past three years*. The LBEL is a metric that tells us not only how heavy the loads were, but what percentage of the workout was based on lifting. So if the workout had 135-lb. cleans and burpees, the average relative weight is 1.00 but the LBEL is 1.00x50% = 0.50. 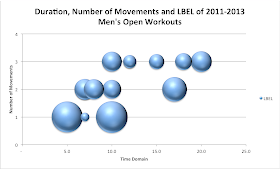 You'll notice that as the workouts get longer, the weights tend to decrease and the number of movements tends to increase. This is in line with what we typically see in CrossFit programming. Programming 7 minutes of burpees (Open 12.1) is torturous, but not unreasonable; programming 20 minutes of burpees is stupid (and dangerous, quite frankly).

OK, well, you did all this research, why can't you just tell us what the workouts will be?

Because I'm not Dave Castro, and ultimately, what happened in the past doesn't necessarily impact what will be coming in the future. There's nothing stopping HQ from saying "screw it, we're going to start requiring weighted pistols in the Open."

That being said, the Open has tended to be pretty predictable. After I published last year's version of this post, in which I emphasized how much value was placed on burpees and snatches, guess what showed up in the first workout last year? 17 minutes of burpees and snatches. My guess is that HQ's not really trying to trick us in the Open. They save that stuff for the Games.

So do with this information what you will. I'm not telling you how to train, I'm just telling you what you should be training for.

On a personal note, this may be my last post for a couple months, potentially until the Open starts. My wife and I are expecting our first child in the next few weeks, so I'm not exactly sure where blogging about CrossFit will fit into the schedule in those first couple months. We shall see. In any event, good luck with your training!

*Note that for this chart, I considered Open 11.1 a single-modality despite technically being a clean and jerk. Also, in calculating the LBEL for the snatch workouts with varying weights, I took the average weight lifted for someone who reached regionals. This reflects the fact that, while only 75 lbs. is required, for a regional-level athlete, they'll be moving somewhere around 130 lbs. on average throughout the workout.
Unknown at 7:59 AM
Share