For the first couple of months after the Games, I kept thinking that I needed to get started on my Games recap and hopefully a few new analyses for the offseason.  I'd do it tomorrow, I thought, just after work and life slow down.  When would that happen?  Tomorrow turned into next week, next week turned into next month.  Sometime in November, I realized the slowdown wasn't coming any time soon.

I've been adding more and more to this site for the past three years, culminating with the 2nd annual Games Pick 'Em contest this year, which went as well as I could have hoped.  We had nearly 75 entries and I was able to keep the standings up to date throughout the up-and-down Games weekend.  But since that time, work has picked up and shows no signs of slowing.  On top of that, my wife and I are expecting our second child in April 2016.  There's just no way I can realistically keep the bar high for content on this site with my current schedule.  And if it's going to turn into a half-assed effort, I don't think it's worth it.  I'm proud of the level of quality and timeliness that I reached with the site in 2015, and I don't want to sacrifice that.

I don't know if the site is done forever.  I hope not, but I also realize it will be hard to get resurrect things after a long time off.  My goal is to keep somewhat up to date with aggregating data, which has always been the toughest part of this operation.  The web site itself will remain up, so hopefully those of you that are relatively new can still peruse old posts, many of which are still relevant today, in my opinion.

I'd like to thank everyone who has read, commented or contributed to this site over the past three years.  Almost all the feedback I received here was positive, or at least constructive.  I've only met a handful of you in person, but I feel like I had a small little community of folks that I "knew," albeit only through internet comments, podcast and tweets.  So if and when the day comes to get this thing started again, I hope you'll all be here to start reading again.

As always, good luck with your training!
Posted by Unknown at 8:59 PM 18 comments:

Back from the Dead with More 2015 Games Analysis

In late July, I caught a break at work that allowed me to watch the 2015 CrossFit Games nearly uninterrupted from Friday through Sunday.  I kept up with the CFG Analysis Games Pick 'Em daily and took to Twitter several times a day to converse with others about the action.  It was glorious.

The day after the Games ended, things turned around in a hurry.  Free time evaporated quickly, replaced by weekends and nights working just trying to keep up at work.  In past years, I typically like to post my thorough CrossFit Games recap within a few weeks of the end of the Games, but that just hasn't been possible this year.  But I have been able to chip away at a few different analyses, and I figure now is as good a time as any to post what I've found.  I know many of you have moved onto the Team Series (starting today!), but this post will focus on the individual 2015 Games season.

As I do most years, I looked at the results from this year's Games under a number of different scoring systems, and Davidsdottir and Smith wound up on top in all of them.  Here are the top 3 under the various systems I tested:
The top 3 men are actually identical under every scenario I looked into.  The only system I've seen proposed where Davidsdottir doesn't win is a system in which all the athletes who did not complete any reps on Pedal to the Metal 1 were given 0 points.  However, that's not really a system that makes much sense to me.  A more reasonable alternative for the events with large ties is to give all tied athletes the average ranking from that group, rather than the highest possible ranking.  In this case, that would mean giving Davidsdottir and the other 24 women with no reps a rank of 25th, which translates to 30 points, rather than the 54 they did receive.  This would drop her to 766 points, still above Tia-Clair Toomey's actual total of 750.  Keep in mind Toomey also would have lost 12 points under this system, putting her at 738.

Metcons at the Games Keep Getting Heavier

Since the Open began in 2011, the required weights at the Open and Regionals really haven't changed significantly.  Think about it: how many times have we seen 75-lb. snatches required for men in the Open? (answer: 4)  But at the Games, we've seen a steady trend of heavier and heavier metcons over the years.  In 2011, it would have been unreasonable to have 100-lb. dumbbell snatches required in a metcon.  Even something like Heavy D.T. (205/145) would have been a major stretch.

The chart below shows the average relative weight load at the Open, Regionals and Games since 2007.

The chart above does consider the 2014 Clean Speed Ladder and the 2015 Snatch Speed Ladder to be metcons, which I think is reasonable considering the weights are required and the athletes are expected to move the weights quickly.  If we exclude them, the pattern is generally the same, but it flattens out in 2013-2015.  Note that the levels are still well above pre-2013 levels.

Despite these increases in loading for metcons, the 2015 Games was still only the third "heaviest" competition in history, according to load-based emphasis on lifting (LBEL).  That's because the points for the 2015 Games were only 49% from lifting events, which is only slightly above the historical average.  This year's Games had an LBEL of 0.80, which is above the historical Games average of 0.67 but not an all-time high.  The 2014 Games were 55% lifting and therefore had a somewhat higher LBEL (0.89).  This is the highest all-time for the Games, but not among all HQ competitions.

The 2012 Regionals remain the gold standard as far as lifting-biased competitions.  The points at that competition were 67% from lifting events and the average load in metcons was 1.15, which is on par with the 2011 and 2012 Games and higher than the 2013 and 2015 Regionals.  The LBEL at that competition was a staggering 0.92, more than 34% higher than the historical Regional average (0.69).  It's still a minor miracle that Spealler was able to pull out a qualification spot.

Want to Win the Games?  Better Be Able to Run.

Despite having minimal emphasis at the Open and Regional level, we see yet again that running is a huge component at the CrossFit Games.  Running made up 16% of the total points this year, marking the third straight year with at least 11% of the points.  In every year since 2012, running has been one of the top 3 most valuable movements at the Games.

In contrast to what we saw at Regionals, where Olympic-Style Barbell Lifts and High Skill Gymnastics made up a ridiculous 81% of the points, they made up less than 40% of the total points at the Games.  Aside from running, we saw 30% of the points come from Uncommon CrossFit Movements, including swimming, paddle board, sandbag carry, pig flip, yoke carry, assault bike and peg board climb.
Posted by Unknown at 9:00 PM 1 comment:

Today Anders chats with Jesse Mager, aka JesseM, the second-place finisher in this year's Games Pick 'Em and the champion of last year's Games Pick 'Em. Anders and Jesse chat about how he was able to be so successful in the Pick 'Em, as well as thoughts on the Games in general, whether the pegboard was too hard, if Murph was unsafe and the age at which people should stop doing muscle-ups and squat snatches (maybe never?).

I needed a couple days to decompress from binge-watching this year's Games, but I've been able to do some preliminary analysis and put a few thoughts together.  I'll follow up in the next week or two with some more in-depth coverage of this year's Games and the season as a whole.


Well I've already gotten pretty long here, so that will be it for now.  Don't worry, more to come in the coming weeks.  Stay tuned.

P.S. I did read the whole interview with Emily Abbott that has been so often quoted (a cached version is here), and honestly it's not nearly as bad as some of the quotes that have been cherry-picked out of it.  Take a read and let me know what you think.  I am disappointed it was taken down from the site, though.
Posted by Unknown at 9:49 PM 10 comments:

Standings below are final, pending any potential mistakes I made.  PLEASE LET ME KNOW ASAP IF YOU FEEL THERE IS AN ERROR WITH YOUR POINT TOTALS.

This was a wild CrossFit Games, and in the end, the bookie (me) wound up making a huge profit on the gamblers (all of you).  The field racked up a mere 5,231 points on 7,400 points of wagers.  Not a single one of the 74 entries had Katrin Tanja Davidsdottir winning OR Tia-Clair Toomey on the podium.  And I'll be the first to admit, I didn't see this coming either.  Better luck next year, and congrats to Ian M!

Individual picks are below, with orange highlights for all correct picks. 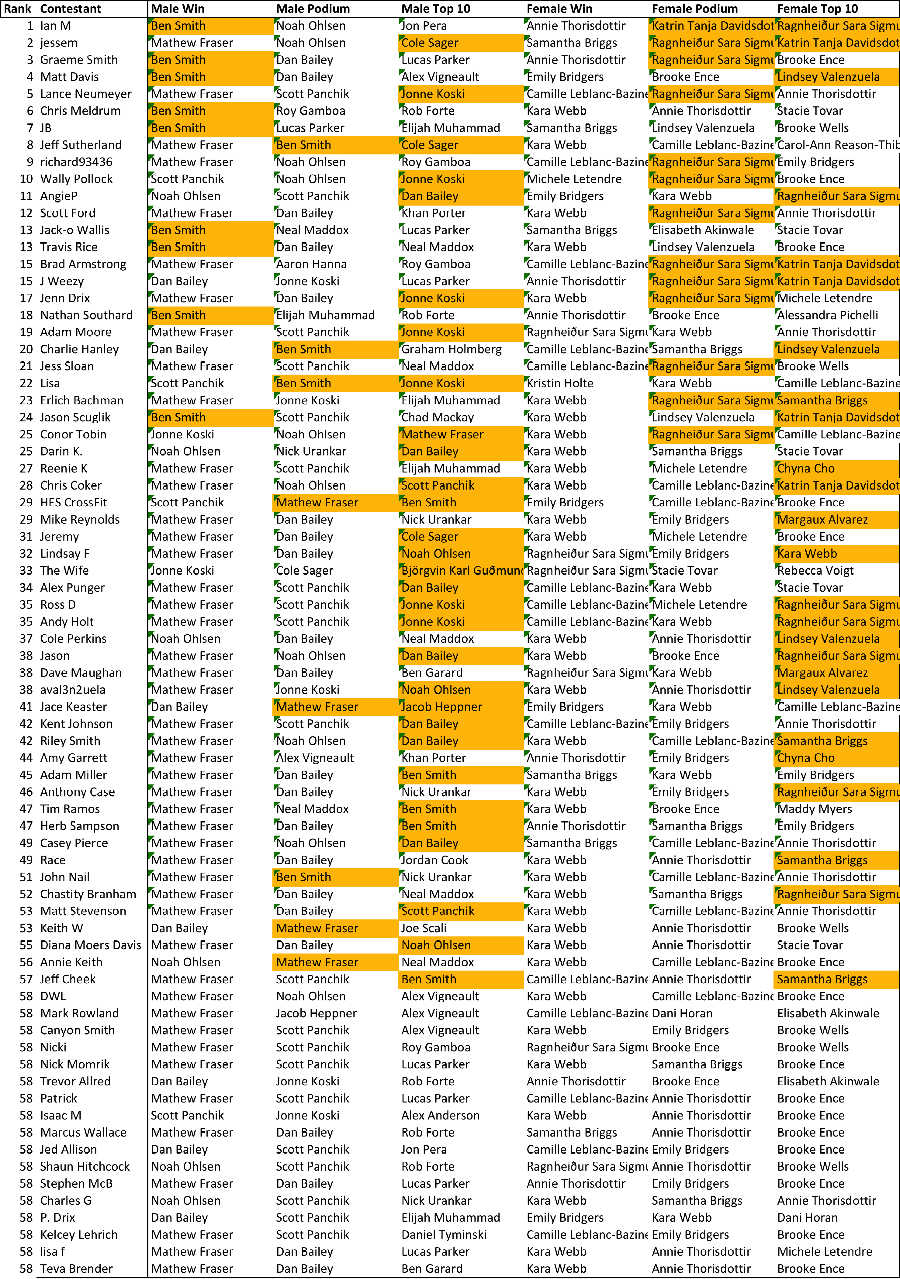 Today old friend and long-time CrossFitter Alex Punger joins the podcast to chat about the upcoming CrossFit Games. The two discuss the programming so far, which events they'd like to see repeated from the past, whether or not the softball toss should come back (hint: no) and their picks for the Games Pick 'Em.

Today, with just over a week remaining until the 2015 CrossFit Games kick off, I've decided to look back at some of the most impressive individual event performances in recent Games history.  How to determine the "best" performances?  By using the standard deviation scoring method that I proposed way back when (not that I'm the only one to have proposed it).  Using this method, we compare each athlete's score to the average score in that event, then divide by the standard deviation of scores in the event.  The larger the number, the further above average the athlete was.  This allows us to compare performances across events, and in this case, identify the truly standout efforts.

I'll keep the commentary short here, and instead, point you to videos that you can watch discreetly at work (or in the comfort of your own home, I suppose).  For now, I've limited my analysis to 2012-2014.  I'll try to expand back into the dark ages at some point.  Enjoy:

And just for good measure, two of my favorites for the fantastic finishes. Both involve Josh Bridges. I do think the Games will miss him this year.

2014 Push-Pull (probably my vote for the most exciting Games heat of all time)
2011 Killer Kage (note: Bridges actually didn't even win this event, that was Spencer Hendel in a prior heat. But still...)
Posted by Unknown at 9:46 PM 3 comments: